In Brazil, what one calls Amazonas designates four different regions: Manaus, Santarem, Belem and the Ilha do Marajo. Amazonas, Brazilian state of Amazon is only surrounded by theoretical borders, due to the constant motion of that unbelievable mass of water and jungle. Amazonas… the name in itself is an invitation to travel since, according to reliable information, it is supposed to come from an Amerindian word meaning “the sound of water”… 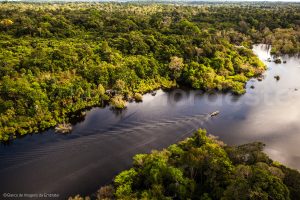 At first a small port authority, first under Spanish supervision, then Portuguese, isolated from the rest of the world, Amazonas has only known its golden era in the 19th century, when its inland navigation routes gradually became more secure and when came the glory days of rubber trees cultivation. From then on, Manaus became a powerful town, drowning in gold, acquiring unbelievable monuments, even building in the middle of the jungle, an identical reproduction of its Parisian twin, the opera Garnier. Billionaires and miserable seringueiros in charge of collecting rubber from the trees, prostitutes and luxury courtesans, builders and scientists, Manaus has very early become a mythic town ; but as soon as the quotation of rubber trees collapsed, it lost everything. In just a few months, Manaus the town of wonders became a sleeping beauty.

Yet nowadays, Amazonas still makes people dream. Of course Manaus has now become a two thousand inhabitants industrious megalopolis, but the green treasure surrounding it, mostly jungle, is still fighting as much as it can against human aggressions. In some places, fauna and flora have regained their rights and when sailing on board one of those flat-bottom launches that travel up and down the numerous river branches, one realizes that it is here and nowhere else that the heart of our planet beats and it is also there that one can find the green lungs without which humanity would not have existed.

Written by: © Jean-Paul Delfino (This text is subject to copyrights protection in accordance with existing laws)

Jean-Paul Delfino is a French writer and screenwriter so passionate about Brazil that he has taken on the writing of a major novel fresco entitled "Suite brésilienne" which covers three centuries of great Brazilian history.

Carte
We use cookies to ensure that you have the best experience on our website. If you continue using this site, we will assume that you are satisfied with it.I agreePrivacy policy