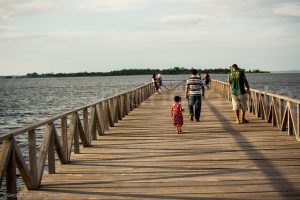 Like a precious gem between the Tapajos and Amazonas rivers, Santarém has not usurped its name. Elected by The Guardian amongst the most beautiful hundred kilometre shores in the world and distinguished as possessing the planet’s most magnificent clear water beach, this city is beyond words. Even more so as it cannot be grasped immediately and does not enter any pre-defined classification. Santarém, so named in honour of her elder Portuguese sister, when compared to the size of Brazil, remains a small town for its population does not exceed three hundred thousand inhabitants. 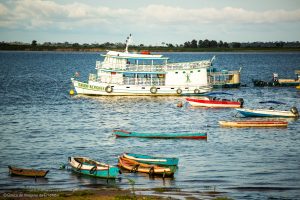 Founded six years after Belém, the city had for a long time remained anonymous and was only a stage in the middle of the mysterious jungle, still peopled in those days, by Indian tribes. But, about thirty years ago, everything changed. Miraculously, Santarém began to wake up. It realized that its main wealth was its preserved wilderness. With its Alter do Chao beach, its fauna as well as its flora, its innumerable waterfalls, its islands and its multiple branches nurtured by the generous waters of the Amazon River; it now relies exclusively on ecological, historical, cultural and gastronomical tourism.

Thus Santarém has developed in order to enhance its original splendours without sacrificing anything to mass touristic activity. It has gradually established codes and rules allowing everyone to benefit from the preserved surrounding nature, spotlighting it like the ever changing sparkle of a pearl inside a jungle jewel box.

Written by : © Jean-Paul Delfino  (This text is subject to copyrights protection in accordance with existing laws)

Our description of Santarem is on this web page​ : https://terra-nordeste.com/en/destination/santarem-alter-do-chao-en/

Jean-Paul Delfino is a French writer and screenwriter so passionate about Brazil that he has taken on the writing of a major novel fresco entitled "Suite brésilienne" which covers three centuries of great Brazilian history.

Carte
We use cookies to ensure that you have the best experience on our website. If you continue using this site, we will assume that you are satisfied with it.I agreePrivacy policy